Millennials, generally described as 18-to-34-year-olds, have moved past Generation X to become the largest generation in the American workforce, according to a Pew Research Center analysis.

Using Census Bureau data, Pew found there are 53.5 million millennials in the workforce, or about one-third of all workers, as of the first quarter of the year. By comparison, there are 52.7 million Gen Xers, 44.6 million baby boomers and 3.7 million from the Silent Generation.

“With its disproportionately large share of immigrants, and at an age of transition from college to the working world, the millennial generation’s workforce is highly likely to grow even further in the near future,” Richard Fry, a senior researcher at Pew Research Center, said in a blog post.

Of course, the much-analyzed millennial generation has also been the subject of many myths. And data on specific generations is notoriously fuzzy. For example, about 110 million Americans were born in years that fall between clear generational divides and data agencies fail to track generations over time.

Mr. Fry, in an interview, said the latest data show a generation coming of age–not just kids anymore but young adults paying taxes, taking on responsibilities and supplying the labor that could help drive the U.S. economy.

The shifting demographics present both challenges and opportunities for employers as the new wave of job-seekers strike out. 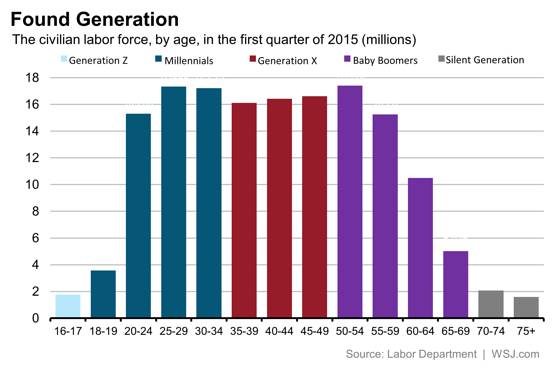 The Iceberg that Sinks Organizational Change

The Self-Leadership Golden Rule and Law

The Align Leadership Team is dedicated and focused on developing custom solutions that solve our clients’ most important problems. We bring the latest research and practices to each client, and we’ve achieved extraordinary results by providing insight, advice and expertise at all levels within organizations.

Why do leaders and teams need executive coaching? Because the best leaders and teams are intentional about what they do; they continue to learn, address their blind spots and develop themselves throughout life. We bring best practices and keen insights to our coaching clients.

Through all levels of an organization, we help leaders to develop a vision for the business that aligns with successful strategic and operational growth. Align Teams is designed for intact, cross-function teams. Its goal is to help create a mutual community that shares a common vision, aligning ways of working, and trusting and effectively communicating.